Music has been a part of my life one way or another for most of it, from playing to making to listening.

When I was young, my grandparents were trying to find hobbies and stuff for me to do. I am low-vision, asthmatic, and somewhat frail in other manners so sports and outdoor activities were generally out. They started introducing me to indoor youth gymnastics but my grandparents ended up pulling me out of that as the instructor wasn’t accommodating my vision issues (I don’t feel this was the case, but I was rather young so just deferred to my family). At least the little pies at a small shop across the street were good, so that wasn’t all bad.

Another thing my family tried to get me in to was music. They had me start playing the piano – they set me up with lessons with the school’s music teacher, I cannot remember what grade I was in as this was very early in my school life. This was no easy task for me as sheet music involves reading lots of small details, so some accommodations were necessary – namely hand-enlarging sheet music or renting ready-made large-print music, which wasn’t as easy to come by. I also spent some time in the school choir.

I started out on small electric pianos, but eventually my grandparents bought an upright piano and put it in the living room, which eventually ended up being The Music Room, more-or-less. For years I would continue playing the piano, encouraged by my family who seemed to enjoy hearing my playing (of course this meant I’d hear some gentle criticism if I hit the wrong notes or played too fast, but it was never anything harsh). I’d practise almost every night after school. I enjoyed it – I liked hearing the music I was playing and it was a lot of fun. Eventually I’d go on to take lessons from a local music teacher in town, after having learned to read sheet music from the school. Attending various recitals and talent shows, I would get to show off my skills to others and receive encouragement and feedback. Recitals were always fun, but not stress-free, however. Lots of practising and advice from my piano teachers always meant improvement in my skills and confidence. Eventually, I would end up playing piano versions of some of my family’s favourite songs.

Once fifth grade came around, My family and I decided I wanted to take on a new challenge: joining the school orchestra and picking up the violin. I would now be playing two instruments: the piano and the violin, continuing to practise and perform both. My piano skills definitely benefitted me as I started orchestra – I could read sheet music and could keep along with piano accompaniment. I have fond memories of sitting with my grandmother in her office reading the little info booklets telling me all the various parts of the violin, how to care for one, and how to play one. A good friend of mine that I’d had since kindergarten had also started orchestra, so I was not playing alone – I’d make several friends in orchestra along the way, but not without some friction, as well.

My grandmother had gotten sick around 5th grade, and in 2005/6 she would end up in hospice care. A hospital bed was set up downstairs in the living/music room, and I would play her favourite songs for her (unfortunately, not my best – too fast, mainly). My grandfather would continue to encourage me to keep up with both instruments, though after her death. He liked encouraging me to do what made my happy.

Music stayed a part of my life, and in some ways helped me cope with what all was going on. I continued to perform piano recitals, and orchestra concerts as well. I would even play a few talent shows – I even went to an outside violin tutor to help me with get better at individual performances. I never excelled, but I was proficient as the violin. To this day I have considered taking it up agin.

Unfortunately, as my mental health began to decline, I would begin to lose an interest in playing music as time would go on. As a weird kid on the autism spectrum, I wasn’t treated well in school – especially not by other students in my orchestra classes. They’d want to avoid being in group projects with me, hide my bag of books and supplies in places I couldn’t find them, and generally other awful/mean things. This would begin to sour my interest in playing music, but I kept at it for a bit more.

In junior high, my mental health was in decline – depression from a not-so-stellar home life, bullying, and general isolation. I began to care less and less about playing music. As a result of bullying and poor mental health, I’d drop out of orchestra when I entered high school. Wasn’t a huge loss – few of the friends I had in orchestra genuinely liked me. Years later I’d end up trading the violin my grandfather bought me for a super rare and interesting computer (with his blessing). I kept at the piano in to mid-way through high school, though.

In high school, my mental health worsened even further – I would go through my school days miserable, but I had one thing that made life more bearable: I could listen to music at lunch time and eventually during classes. I would have one earbud in my left ear playing music from the start of the day, to the end of the day. This made life tolerable: I could focus with enough distraction to silence my mind and its more negative thoughts, I could tolerate my mood by listening to music that matched it. Happy music on a good day, sad music most other days.

I kept up the piano and continued taking lessons despite being miserable – it still brought me some joy and my grandfather encouraged me…but I am pretty sure he could tell something was wrong. I was no longer touching the violin, and piano practising was becoming more and more like a chore: orchestra had soured music for me, as did my failing mental health.

Eventually as I was starting to severely experience depersonalisation/derealisation, panic attacks, and extremely severe depression I had to drop the piano lessons too. I was no longer playing any music and was no longer making up my own songs just by playing chords and notes that sounded good together. The only music left in my life was that which I listened to get me through the day on my ipod/phone.

However, through a mutual friend I met a kid named Mitchell who went to the same school. Eventually through hanging out with him, I’d start a new hobby: making my own music. This hobby (and medication) eventually brought me joy – I’d go over to his house and play with his synths and other instruments. Some days we’d just listen to music that inspired us, or that we just straight up just liked – always sharing cool stuff. Together we’d make and record a bunch of music, but eventually I’d sell the piano my grandparents had gotten me oh-so-many years ago. I had switched entirely digital and pivoted hard from piano pop/classical to electronic.

To this day music is still a part of my life: from listening to it as I work to allow me to focus, to making my own. Here’s a photo of my music workbench. It’s a permanent work-in-progress, which is half the fun of electronic music. Everything from synths to a sampler to a drum machine. 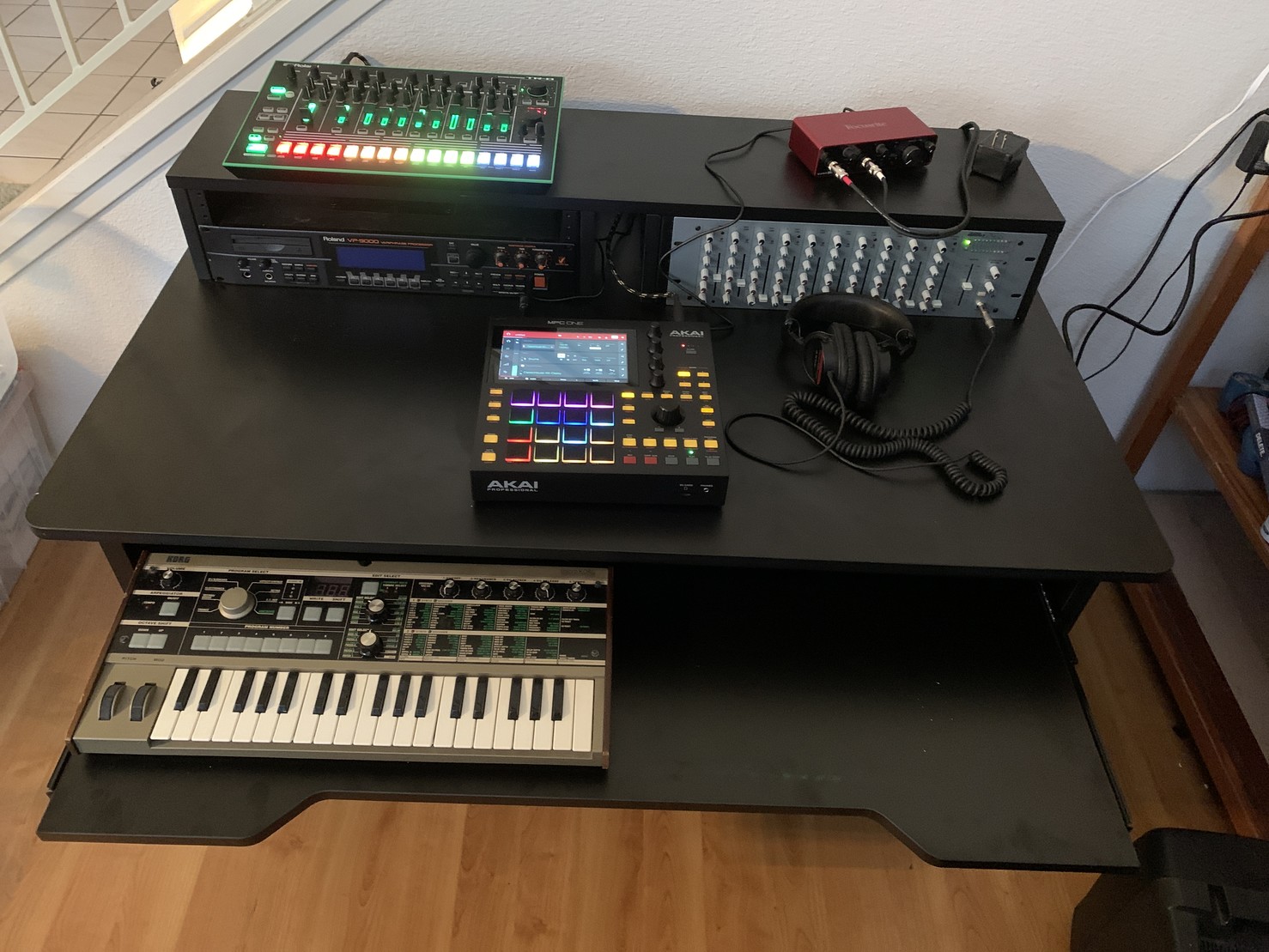 Music in my life has been a long and bumpy journey, but without it, my life would’ve been a lot harder, and with a lot less melody.

So ultimately: thanks to my grandparents for setting in motion a hobby I’d come to love, despite bumps along the way, and thanks to my friends for sharing music with me and broadening my taste.

2 thoughts on “Music: What It Means to Me”

sporks.space is a community blog without any specific topic requirements. come talk to us at #sporks on libera.chat!